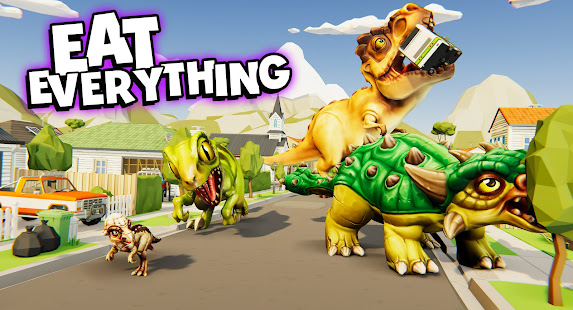 Control sweet and little version of jurassic dinosaur like tyrannosaurus rex or triceratops. Dinosaur.io have classic battle royale gameplay but in dino world. Just eat smaller than you, and run from bigger than you. Sound simple right?

Battle royale mode and jurassic survival arena.
Our dinosaurs escape from the park and now demolish the city. You and others players try to survive as long as can. How big you can be? Eat everything if you are big enough. Try to become the best player in battle royale ranking and rule this crazy world.

We prepare the most famous dinosaurs like (T-rex) tyrannosaurus rex, triceratops and others to play on battle royale mode in dino park.

Dinosaur.io
The big update is here !

In this update we have added:

– A completely new more readable UI
– We added boosts to the game by which our character will gain superpowers such as: super speed, double prize, invisibility, freezewave or Shockwave which will destroy all objects around us
– Wheel of fortune with great prizes !
– A new store where you can buy a box with game currency
– Super gift for everyone
– A mini game at the end of each game with a prize multiplier

Thank you for your comments.

Bible Color By Number For You 20.2