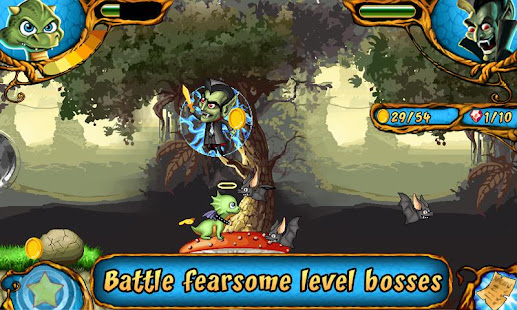 Uncover the secrets of your forefathers as the last of the dragons in this epic fairytale adventure.

You begin as a baby dragon, alone in your warm cave, but under threat from the evil Dracula and his minions, you’ll need to grow up quickly and brave the vast world outside your cave in order to survive.

By completing levels and collecting artifacts you’ll be able to see your dragon grow, allowing him to take on tough new challenges and learn vital new skills. You’ll even be able to customize the look of your dragon by unlocking adornments throughout your quest.

Each level has a multitude of coins as well as rare perks that will greatly enhance your dragon’s abilities for a limited time. As you progress you’ll unlock a variety of mini-games which can then be accessed any time. Your main quest remains to defeat Dracula, and with the wisdom of your forefathers sealed away in ancient tablets, you’ll be able to learn what it means to be a dragon and how to defeat the evil Dracula.

Have a safe journey and thank you for playing with us! 👍