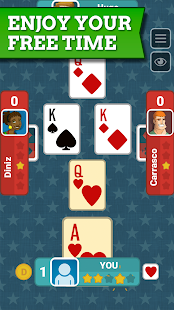 Euchre is a classic trickster cards game. It’s widely played in the United States and other English-speaking countries where it’s also known as Yuker or Euker.

In our trickster Euchre app, you play with 3d ifferent other players Euchre online, forming 2 teams, and the deck in play consists of the 9, 10, J, Q, K, and A cards. There is always a trump and your objective is to score 10 or more points (the original trickster card game). You get these points in matches with 5 tricks, where the team that scores the most points and tricks wins.

In Euchre Online Trickster Cards, a classic trickster cards game, you play just like in real life with addicted players or Euchre with friends, choosing between accepting the trump, passing or changing your cards, playing the match with your partner, or going alone. Play the best cards and use the trumps wisely to win the tricks in Euchre.

ENJOY OTHER FEATURES
– Euchre Online Trickster Cards has 3d ifficulty levels: choose between easy, medium, and hard.
– Customize the cards from the deck and the table.
– Autosave: restart the card game from where you stopped.
– Statistics with your performance in the game.
– With multiplayer game mode!

If you like card games like other trick-taking card games, you will love Euchre Online Trickster Cards! Learn how to play Euchre (also known as Yuker or even Euker) and develop your skills!

Download our Euchre multiplayer online and Single-player offline and get ready for hours of fun with this classic trickster game.
“Euchre was downloaded by more than 100 thousand people and now they will have the opportunity to become a VIP member with the subscription of the game and remove all ads!

You still can play for free or play without the ads! What are you waiting for?”