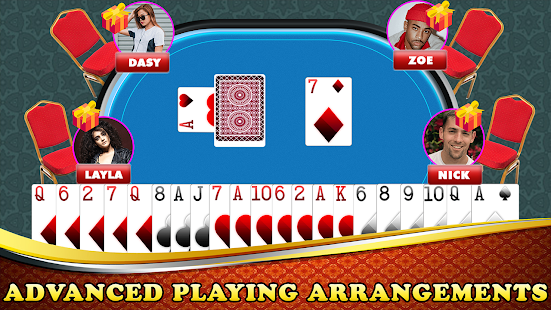 Marriage is a three-pack Rummy game.

Players and Cards
From two to five people can play. Three standard 52-card packs are used: 156 cards in all. There are no printed jokers, but in each deal a number of wild cards are created and these are sometimes collectively known as “jokers”.Deal and play are clockwise.

The Deal
Any player may deal first. After the play is finished and the hand scored, the turn to deal passes to the left.

The dealer deals 21 cards to each player, [one at a time], and turns the next card face up to begin the discard pile, and places the remaining cards face down in a stack.

Any player who is dealt a tunnela (three identical cards) can expose these cards immediately, and they may then be worth points at the end of the game. A tunnela that is not exposed at the start, because the owner either acquired it later or chose not to expose it, has no point value.

The Play
The play begins with the person sitting to the left of the dealer, and players take turns clockwise around the table.

Each player in turn may take either the (unknown) top card of the face down stack or the face up card discarded by the previous player (on the very first turn, the first player may take the card turned up by the dealer). The player must then discard one card face up on the discard pile. Although the discard pile is spread so that players can still see all the cards that have been discarded previously, players are only allowed to pick up the latest discard. A player who takes the face up card from the discard pile is not allowed to discard the same card.

Ending the Play
There are two ways in which the play can end.

1) A player who has laid down three combinations that are tunnelas or pure sequences is able after drawing a card to form four more valid three-card combinations. The player lays down these combinations, discards the remaining card, and the play ends.
2) After drawing, a player has eight dublees (pairs of identical cards). The player lays them down and the play ends. Eight dublees use 16 cards, so the player will have five unusued cards plus a discard – these can be any cards.

To report any kind of issues with Marriage Game, share your feedback and tell us how we can improve.
email: support@emperoracestudios.com
website: https://mobilixsolutions.com
facebook page: facebook.com/mobilixsolutions
*minor bug fixes.