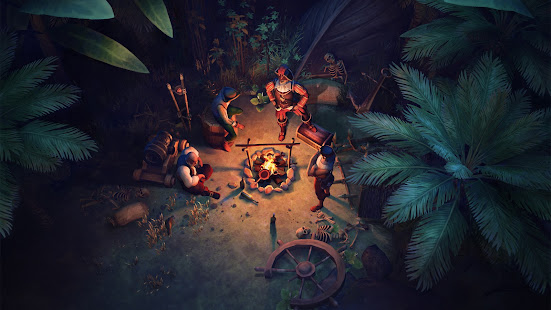 Survive the challenges of the real role playing ocean adventure and become the most feared pirate in the Caribbean! Get your stuff together and lead your small crew, turning this deadly survival into some drop-dead adventure! Survive in the epic ocean free role playing game: Mutiny – Pirate RPG!

GAME FEATURES
⛰Build a fortified island shelter⛰
In this island adventure you have to fight your way through the wilderness and build your fort to protect your treasures and your lives. Gather resources, craft weapons, get rare materials and build a perfect fortress.

🧨Craft Weapons & Armor for a Fight🧨
The craft system will provide you with all you need to survive these haunted pirate islands. Craft from over 100 recipes – from a simple shirt to a mighty pistol. Craft the strongest weapons and armor in the sea. Equip yourself with the best pirate outfit.

🏴‍☠️Lead your crew of pirates🏴‍☠️
For the first time in the survival genre you get a team to control. Appoint them to different tasks from crafting items to defending your fort. Explore challenging island quests and search for pirate treasures. Open the map and explore the sea world. Grow your team to become the best captain of the islands!

⛏️Gather resources⛏️
Stock up the wood for your shelter and first tools, then do some mining for more complex recipes of weaponry. Explore new islands and get more unique resources. Hunt animals to survive hunger and collect rare items.

🏝️Explore & Survive on new islands🏝️
Explore the world of the PVP games in Caribbean archipelago during the golden age of piracy! Reach the abandoned islands and fight hostile pirates, befriend the Indian tribe of Taino and survive in the sea full of sharks.

⚔️Prepare to fight & Loot other players⚔️
Fight PVP battles and lead on the attacks on your neighbors on the map! Get through their defense to the full chests of loot, fight for survival and let the mistress Fortune to smile over you!

💰Trade on a merchant ship💰
Multiple merchants are ready to sell or exchange rare resources, unique items or customise your character. Upgrade your boat and find merchants on the map and get even more valuable loot.

🎁Limited Events🎁
Don’t miss out on the time-limited events. Find an Island of Wrecked Ships on the global map and go there to get rare items to build your ship. At Boarding you can take part in the fight of two ships and find some nice loot there. Other events await for you as well!

Start your own online RPG survivor journey under the black flag today and prove yourself to be a real survivor of the dangerous Caribbean. Try to survive in a role playing sea world!

This is a real Caribbean role playing game with ocean quests and pirates fights. Join this survival adventure! Mutiny is an epic RPG where you have to fight to survive in the brutal island world. Man up!

The world of Caribbean island quest games is all yours! Prove you are worth being named the pirate king. Your pirate adventure begins right now. Get your crew ready to fight in survival games!

Join thousands of players around the world! Mutiny collected the best features of PVP and RPG adventure games. With so much going on you’re sure to remember this pirate island survival quest for long. Hang tough and may Jolly Roger bless you!

Follow our online social media:
Facebook: https://www.facebook.com/mutinysurvival
Discord: https://discord.gg/YAYCqUF
Official website: www.heliogames.com
AHOY! THE 0.28.1 VERSION AWAITS!
• Crew management improvements:
– the sailors assigned to craft automatically to make the most profit out of their bonuses;
– missions made easier: sailors dispatch immediately based on the bonuses;
– workbench upgrades require a sailor;
– sailors rent was disabled.
• Weasel Pitt offers a Goon Refuge treasure map—an additional source of applicants! The sailor bonus depends on the map rarity.
• Island of the Apes tier 5 is here! Look for the map at Weasel Pitt.