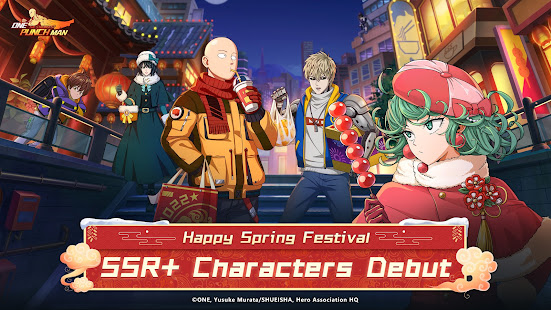 Description of ONE PUNCH MAN: The Strongest

“ONE PUNCH MAN: The Strongest” is a turn-based mobile RPG, officially authorized by the sensational Japanese anime “ONE PUNCH MAN”! Supervised by Shueisha’s production committee, ONE PUNCH MAN: The Strongest has fully restored the world and stories from the original anime! Cities are under attack by monsters! Citizens are seeking shelter, and they need help! It’s time for the Heroes of the Association to come to their rescue! Follow Saitama and fight bravely against monsters. Our goal is not the pursuit of fame, but that of protecting the innocent and helpless.
Heroes united, One Punch K.O.!

[Game features]
· All the fascinating characters from the world of One Punch Man
From Saitama, who can defeat all powerful enemies with one punch (serious version, of course), to Genos, who’s been evolving all along. From Monsters such as the strongest alien Boros, to the ninja Speed-o’-Sound Sonic, the self-declared nemesis of Saitama… Come see popular Heroes and Monsters from the original anime reunite in classic scenes in ONE PUNCH MAN: The Strongest.

· Encore of original CVs from the anime
Voice actors from original anime are back in full force for complete dubbing of story lines! Immerse yourself in the oftentimes hilarious, sometimes melancholic, but always downright phenomenal story of One Punch Man!

· Train and build up your Heroes. Establish your own Hero Association!
Deploy various Heroes and Monsters, all with different personalities and special abilities, and establish your very own “Association”! Create powerful line-ups and activate the strongest Core for Arenas and Tournaments! Try out your strength in Martial Dojos and Endless Battle Zones. Big challenges are ahead of you!

App Information of ONE PUNCH MAN: The Strongest

Related Posts of ONE PUNCH MAN: The Strongest